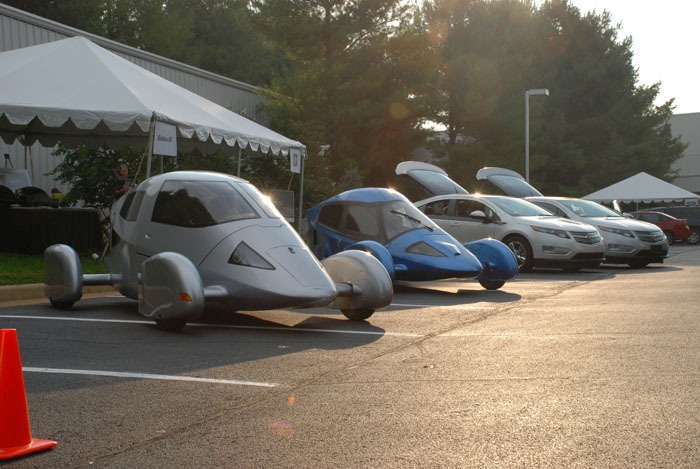 In America there is no shortage of digital inventors, tinkerers, hackers, and dreamers. Companies form around the most ridiculous ideas, test them in the marketplace, often with unpredictable and surprising results. It’s an exciting time for innovators in the information age.

Go back one hundred years and you’ll find a similar state in the automobile industry. Look at this surprisingly long list of defunct automobile manufacturers!

Is there a peculiar combination of cleverness, determination, and blind optimism that compelling Americans to push the boundaries of convention and create great things? Or has America lost its ability to hack on cars forever?

Jason Fagone’s book Ingenious: A True Story of Invention, Automotive Daring, and the Race to Revive America follows several teams competing to win the Automotive X Prize, a $10 Million cash award to someone who can demonstrate a production ready vehicle capable of traveling 100 miles at 100 MPGe or better. The contestants are not skunkwork projects at GM or R&D teams from Ford. They’re people building cars from scratch in their garage. They’re small racing teams using their expertise to increase MPG instead of MPH. There’s even a team of high school kids from West Philly.

Working in manufacturing for most of my career, I was not surprised to find there are still many car hackers out there. Without spoiling anything, the most frustrating part of Ingenious is how well the teams were able to do and how little anyone seemed to care about what they were doing. Government and industry pays lip service to the prize and the ingeniousness of the teams, but fuel economy growth in vehicles is still flat. I don’t think anyone believes industry will be held to the proposed standard of 54.5 MPGe by 2025.

But industry put at least $1 Million into an app that lets you send only the message, “Yo” to your friends.

I enjoyed Ingenious. It pairs very well with My Life and Work by Henry Ford, which captures the spirit of the early 20th century automobile industry (Note: Ford’s autobiography is a manufacturing masterpiece, but skip the anti-Semitic chapters that start around #12)